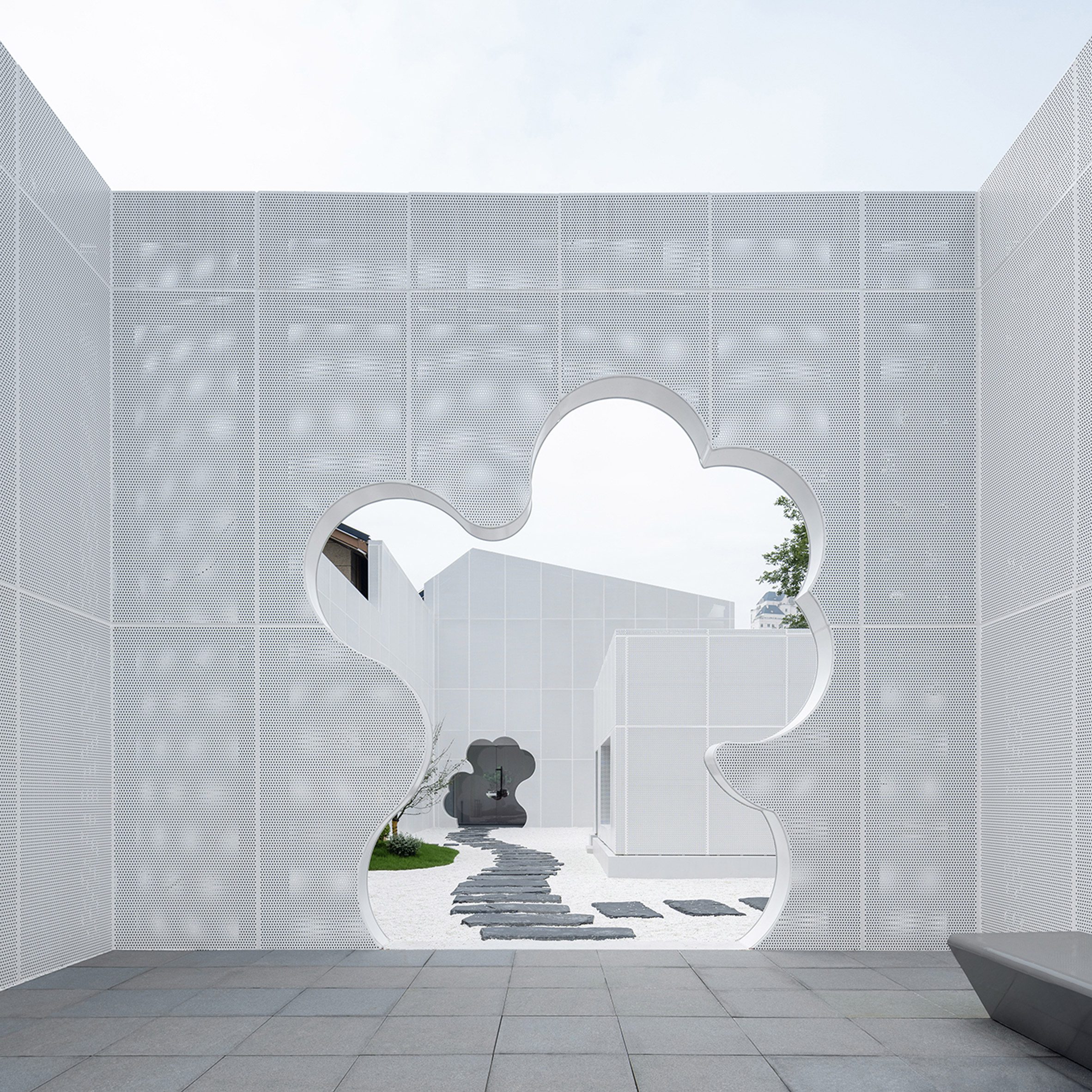 Architecture studio Wutopia Lab has used layers of perforated metal to transform two disused buildings on the banks of Taizhou's Yongning River into a bright and modern bookshop.

Rather than demolishing the existing buildings or attempting to perform "cosmetic surgery" on their cluttered, commercial facades, the studio decided to simply wrap the structures in white aluminium panels.

"The continuous white aluminium wall is used as an addition to create a serene and pleasant visual subtraction. A cloud rises over the riverside and the readers of the bookstore are in the cloud."

The original plan of the site, which Ting describes as "scattered and unfocused", was reimagined to house a number of small gardens as well as a central courtyard to connect the buildings into a single complex.

In the process, Wutopia Lab had to work around two other, privately owned buildings on the site, using the fence between them to mark out a small front yard and entrance for the bookshop.

The site's original trees and plants are left intact in the courtyard, surrounded by white pebbles that reference the work of Ming dynasty artist Qiu Ying.

Places for rest are provided by two "cloud stools", one white and one blue, made from recycled marine plastic.

Inside, the Duoyun Bookstore is split across two levels and five different colour-coded zones.

The first floor is home to a pink and purple exhibition space and a red stepped lecture theatre as well as a neutral-toned meeting room, all connected to each other via different terraces.

These accommodate a children's play platform, a discussion terrace with a fire pit and a labyrinthian terrace that serves as an outdoor cafe.

Here, the architects installed a blue glasshouse made from a special glass that was developed locally for use in the automotive industry. At the touch of a button, it becomes colourless to reveal views of the Yongning River beyond.

On the ground floor, customers can find a section dedicated to lifestyle books, displayed on a triangular orange stand.

This pays homage to a 1967 installation by South African artist Roelof Louw, in which 6,000 oranges were stacked into a towering pyramid.

The same vibrant orange is also picked up in the children's play area upstairs and in the circular booths of the coffee pavilion, which sits further east near the water.

Following the path through the store on the ground floor, visitors are guided to a cultural and creative zone. This is identified by the petrol-blue colour palette applied to shelving and display fixtures, including a second pyramid-shaped display unit.

A luminous canopy of corrugated aluminium panels is installed on ceilings throughout this section to recall the surface of the river outside.

The first floor can be accessed from the cafe via an orange spiral staircase or a wood-panelled stairwell with an integrated display area for reproductions of rare books.

Wutopia Lab has designed a number of unusual bookstores in recent years, including one that maps out the human psyche and another with a triangular lightwell that pierces through six stories.

Photography is by CreatAR Images.