The two founders of Lagado Architects have revamped their own townhouse in Rotterdam to feature bold live-work spaces and a sculptural blue staircase.

The pale-brick townhouse – renamed Workhome-Playhome – is situated in Noordereiland, a largely residential neighbourhood surrounded by the Nieuwe Maas river. 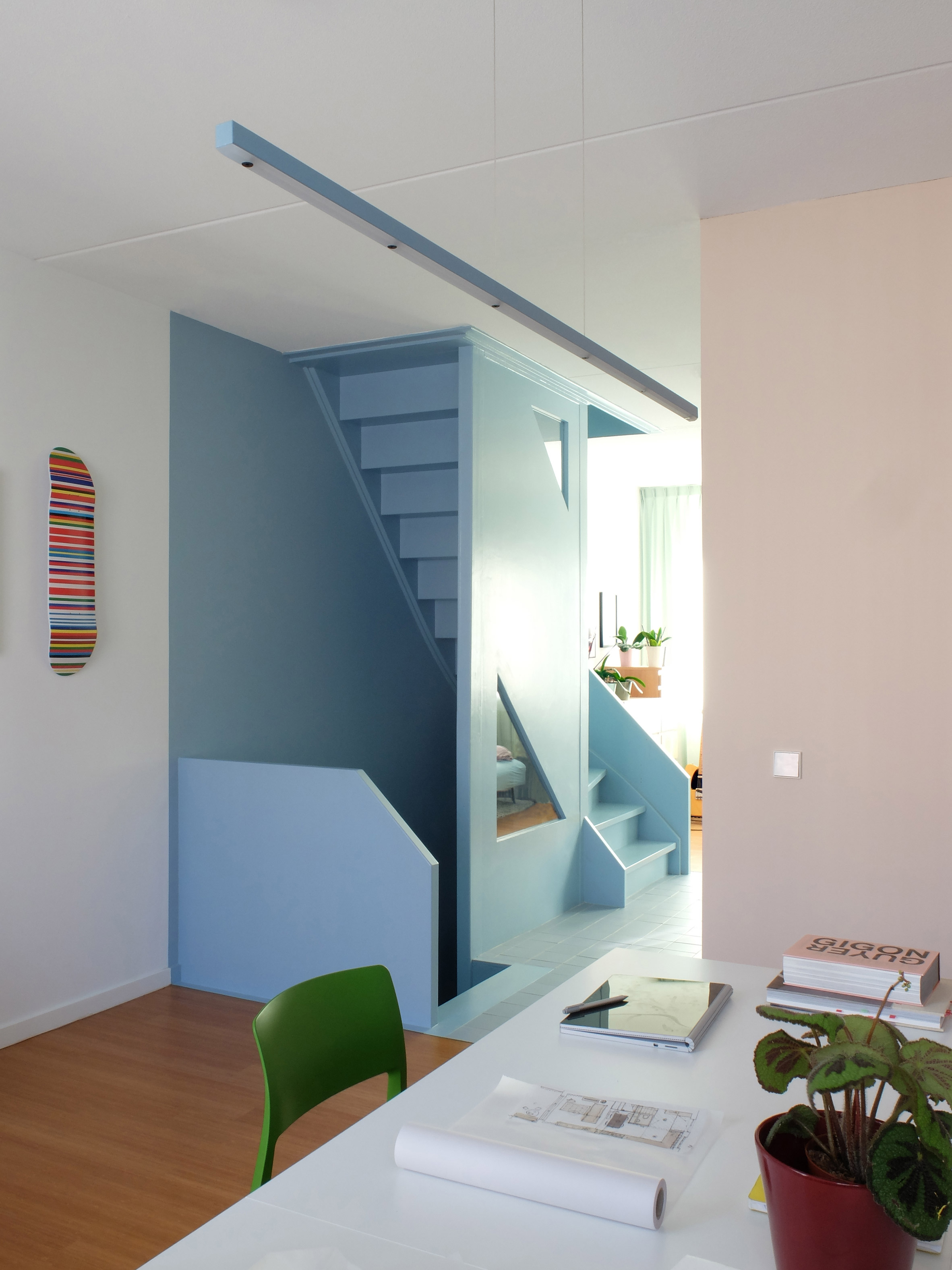 It's shared by the founders of Lagado Architects, Victor Verhagen and Maria Vasiloglou, and their children.

Unhappy with the new-build home's standardised floor plan, the couple overhauled the interior to include more versatile living spaces that could be used for work or play. "We liked the idea of having a multifunctional space in our house to do creative things apart from the living-room," they told Dezeen.

"The main goal of the design was to create an environment that can handle all sorts of use, at the same time, without giving up character in favour of performance."

The pair also thought that using a bold array of colours in the revamp would give the formerly nondescript home a more "outspoken character". 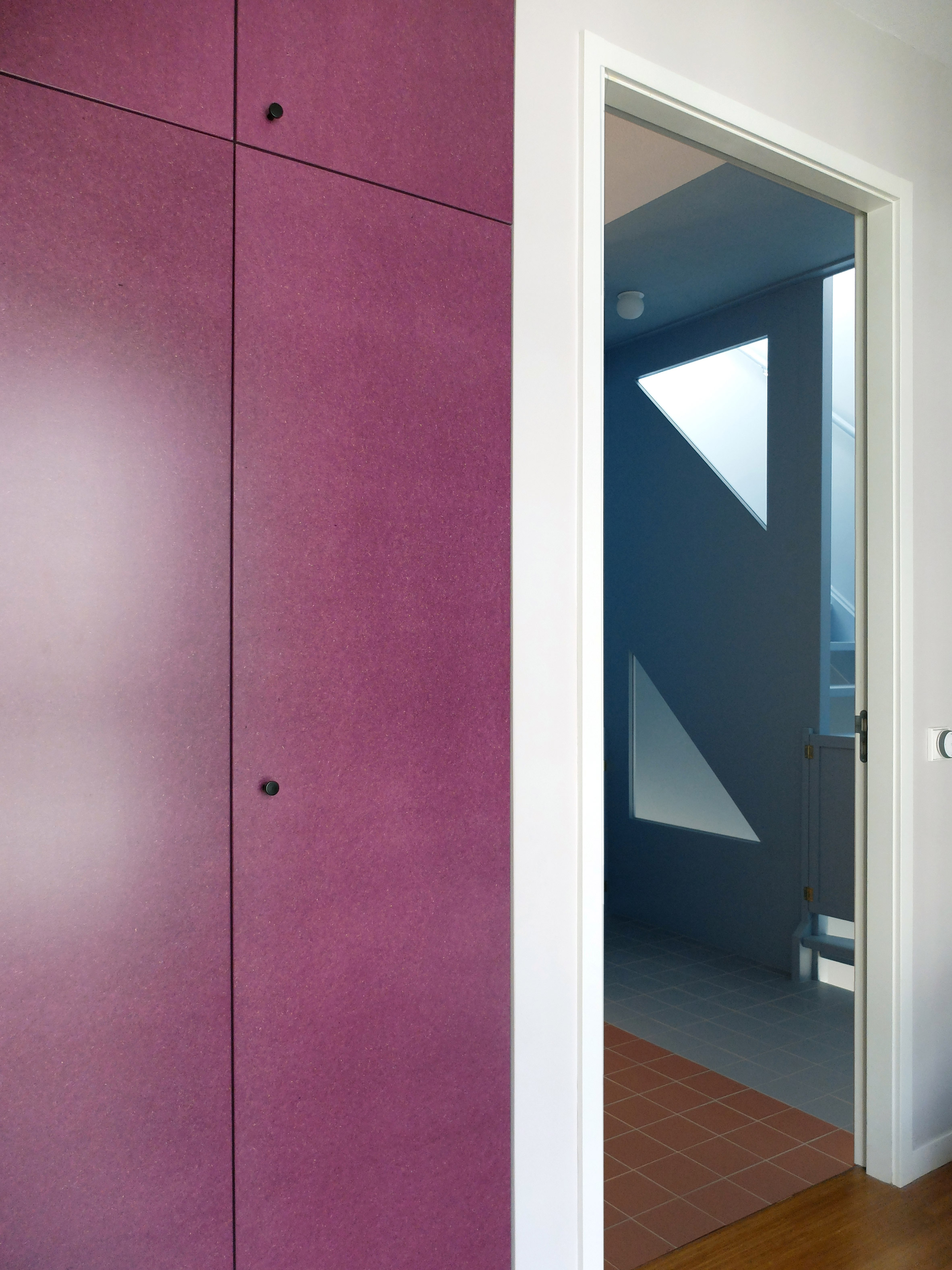 On the second floor of the house is now an open loft-style room. It includes a desk where Verhagen and Vasiloglou can work, or the kids can do homework and arts and crafts.

There is also a bathroom clad in mint-green tiles.

Furnishings have largely been omitted from the room so that, when necessary, it can be turned into a guest room or used for indoor exercise. 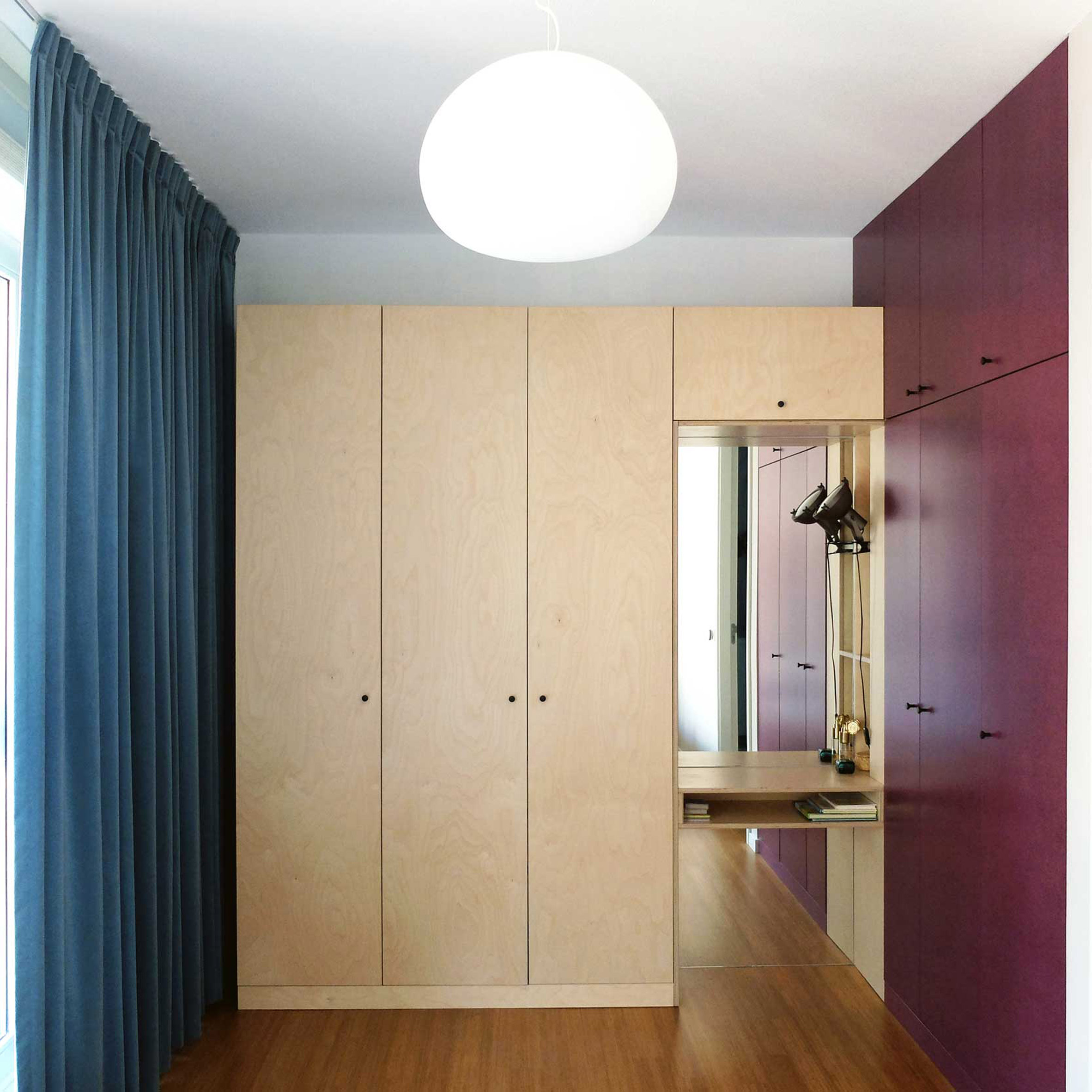 The only fixed element is a vivid blue staircase, which extends through all three levels of the home and up to its roof terrace.

To create it, the architects simply painted the existing steps and erected a matching balustrade. The balustrade is punctuated with triangular openings, giving inhabitants glimpses of different rooms as they climb up and down the stairs. 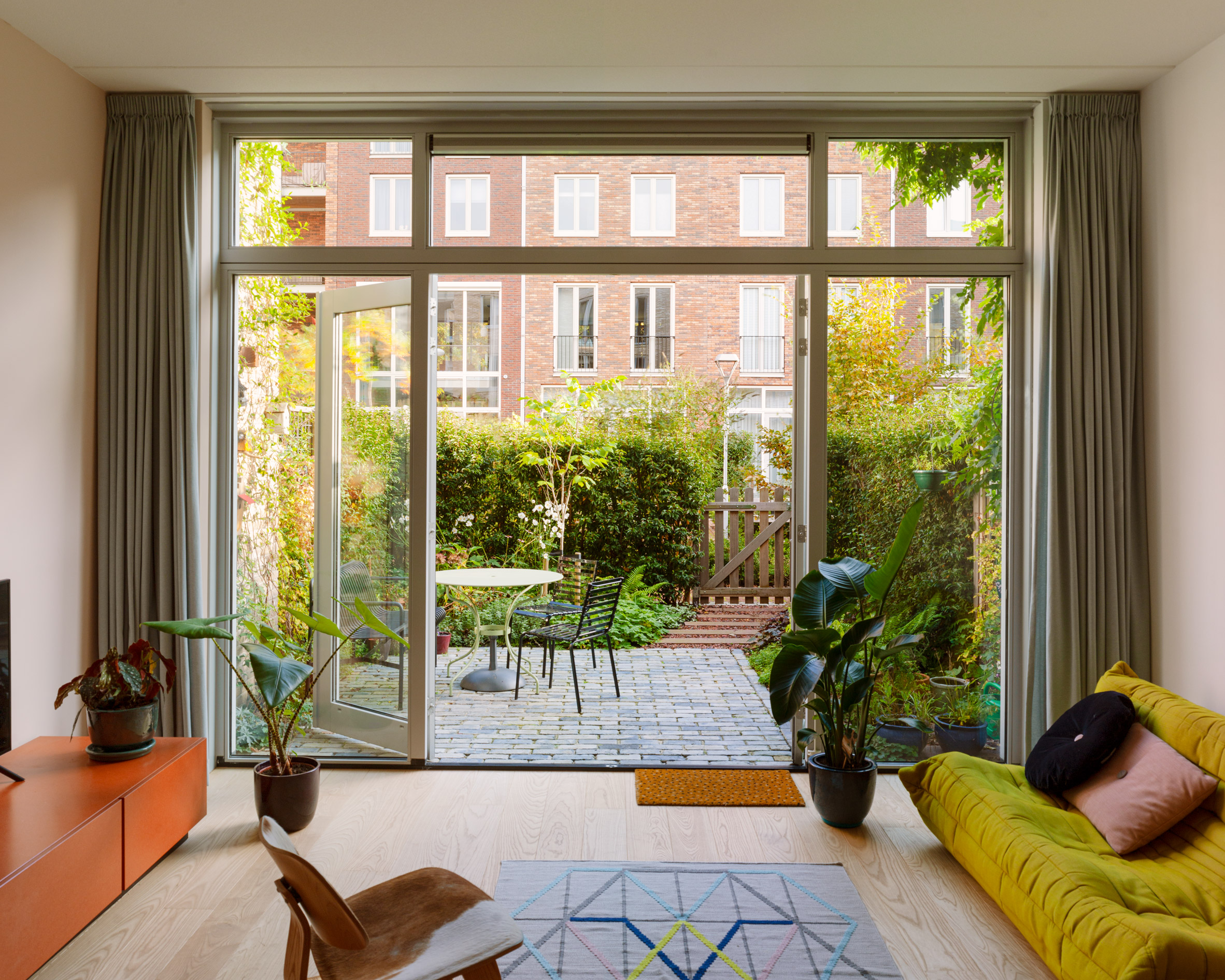 "Initially we thought to remove the stairs but we quickly realised that it was not necessary because their position in the overall floor plan was well-considered," explained Verhagen and Vasiloglou.

"We took them as a given, which eventually sparked our creativity to turn the staircase into a special element of the house," they continued.

"We wanted to add a vertical spatial experience to the horizontally layered house, and treated the staircase as a continuous sculpture." 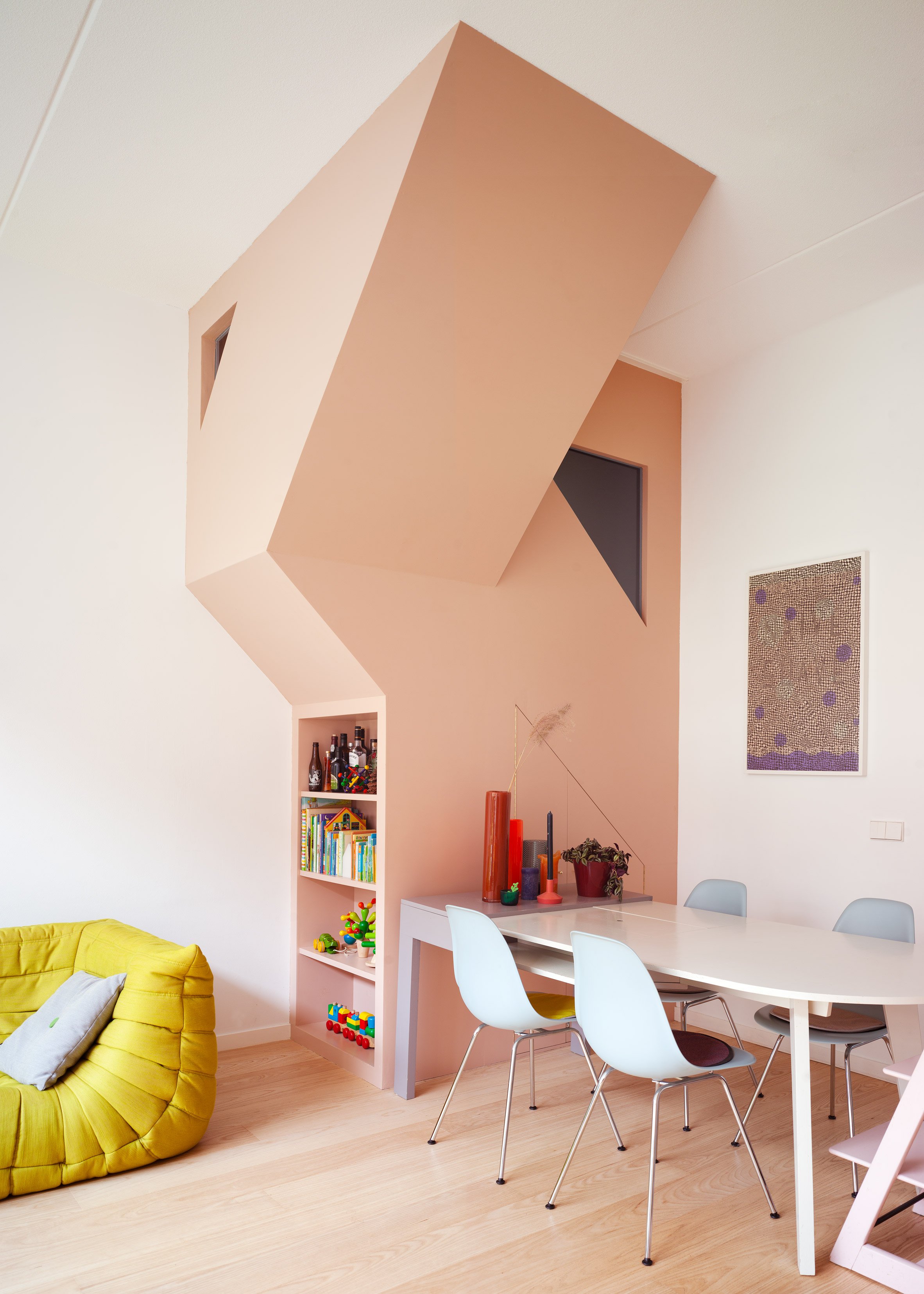 Sleeping quarters have been concentrated to the first floor, which Verhagen and Vasiloglou describe as the "dark heart" of the house.

Joinery here has been painted a deep, plum-purple hue. 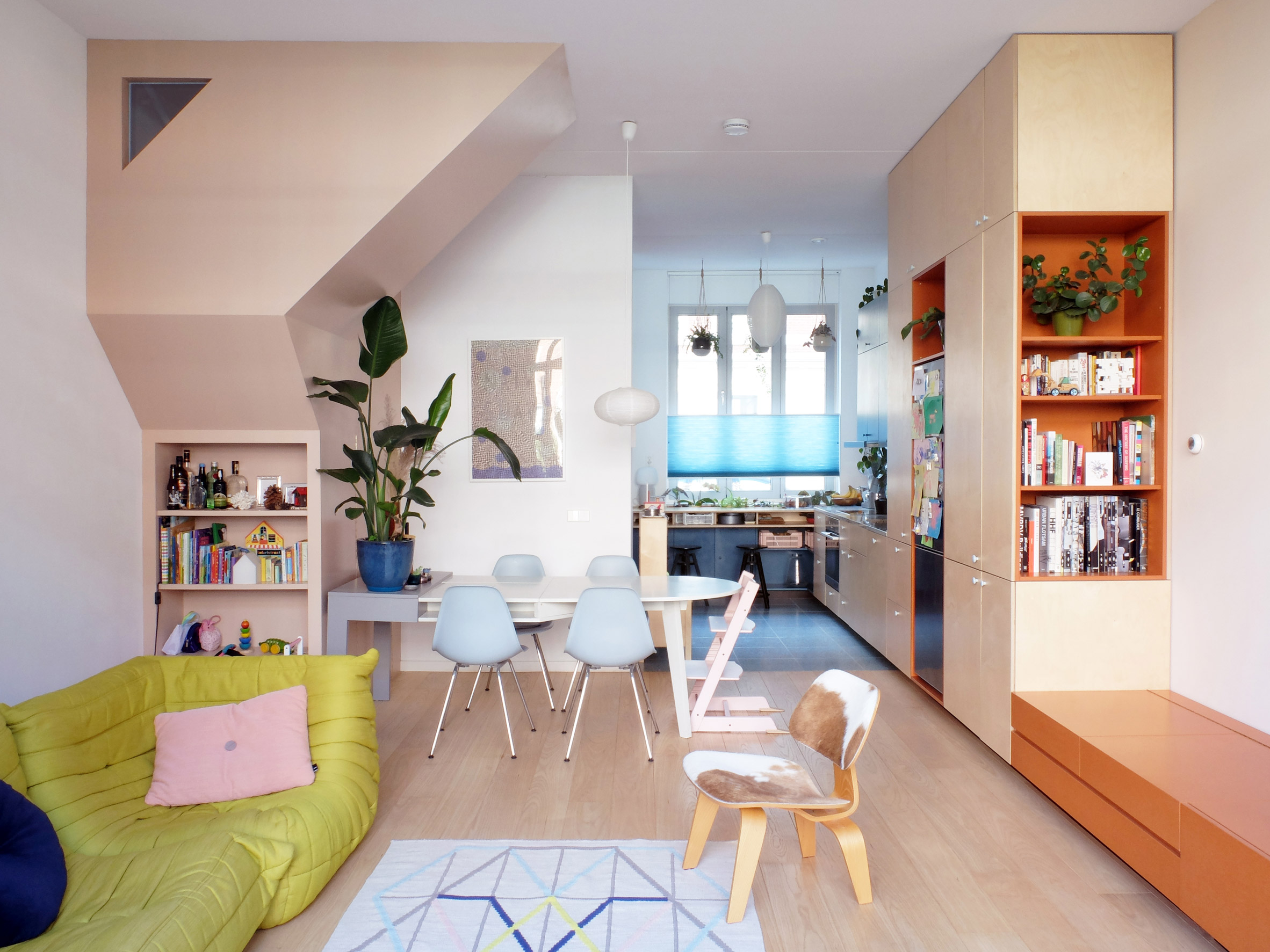 The family living room is at ground level, and has been arranged so that views of the garden are left unspoilt. A chartreuse-yellow daybed has been pushed up against the wall, dressed with contrasting navy and pink cushions.

The portion of the staircase here has also been painted pink and given shelving where the kids can keep their toys. An ashwood storage unit dominates the adjacent kitchen, complete with burnt-orange niches. One of them holds the refrigerator, while the others are used to display personal ornaments and books.

Additional teal-coloured cupboards – which are meant to complement the blue terrazzo floors – have been mounted against the tiled splashback.

A small breakfast bar has also been created directly in front of the kitchen window, which is lined with potted plants. 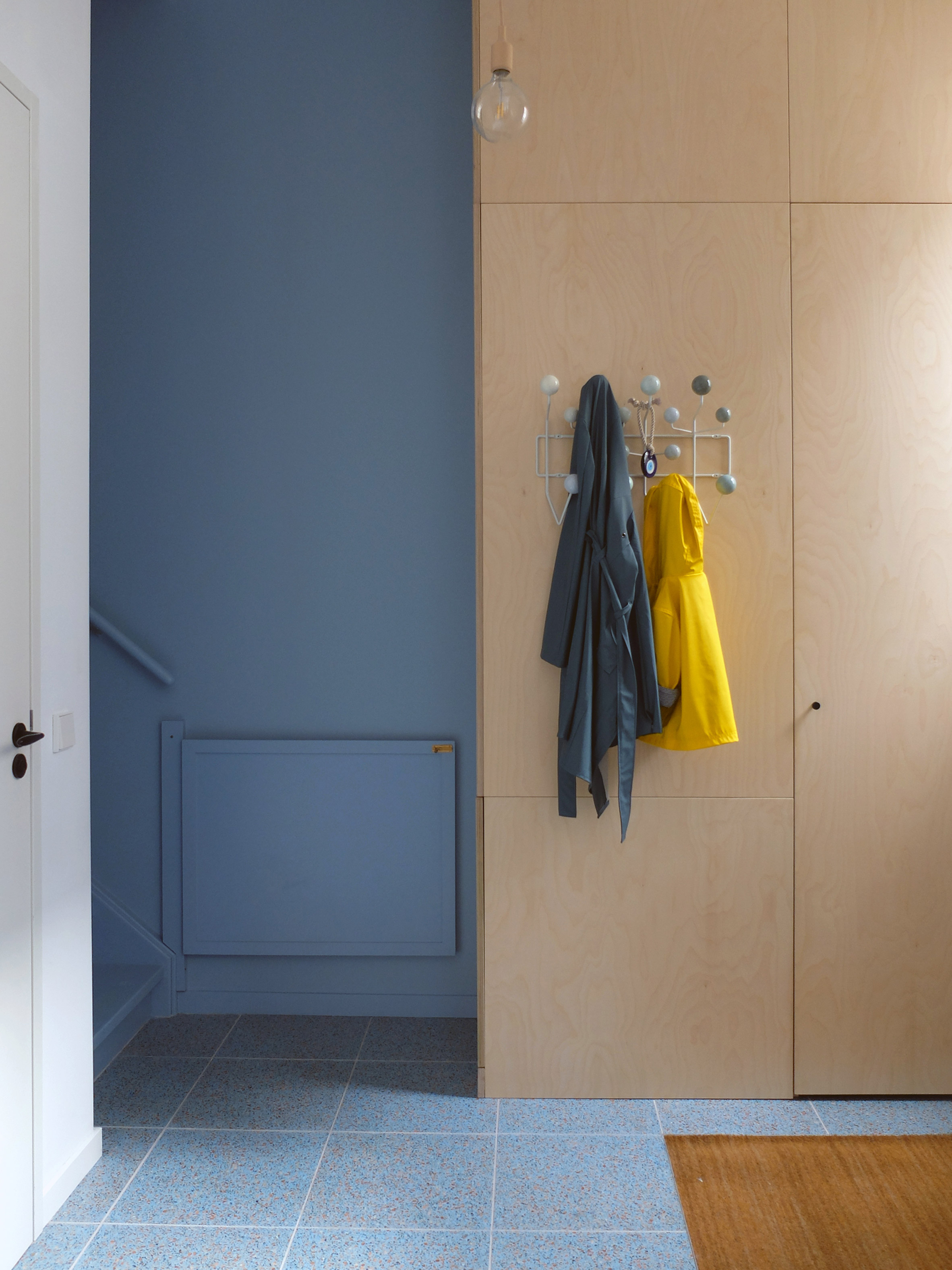 Lagado Architects was established by Victor Verhagen and Maria Vasiloglou in 2011.

It isn't the only practice to tweak a typical Rotterdam townhouse – in 2017, Shift Architecture Urbanism replaced the rear facade of a townhouse in the Dutch city with expansive panels of glazing, allowing two light-filled apartments to be created on the inside.

Photography is courtesy of Rubén Dario Kleimeer and Lagado Architects.

The post Workhome-Playhome is a colourful Rotterdam house by Lagado Architects appeared first on Dezeen.

When the Light Hits Just Right, Our Custom Bookshelves Appear to Be a Series of Buildings
Jan 27, 2023