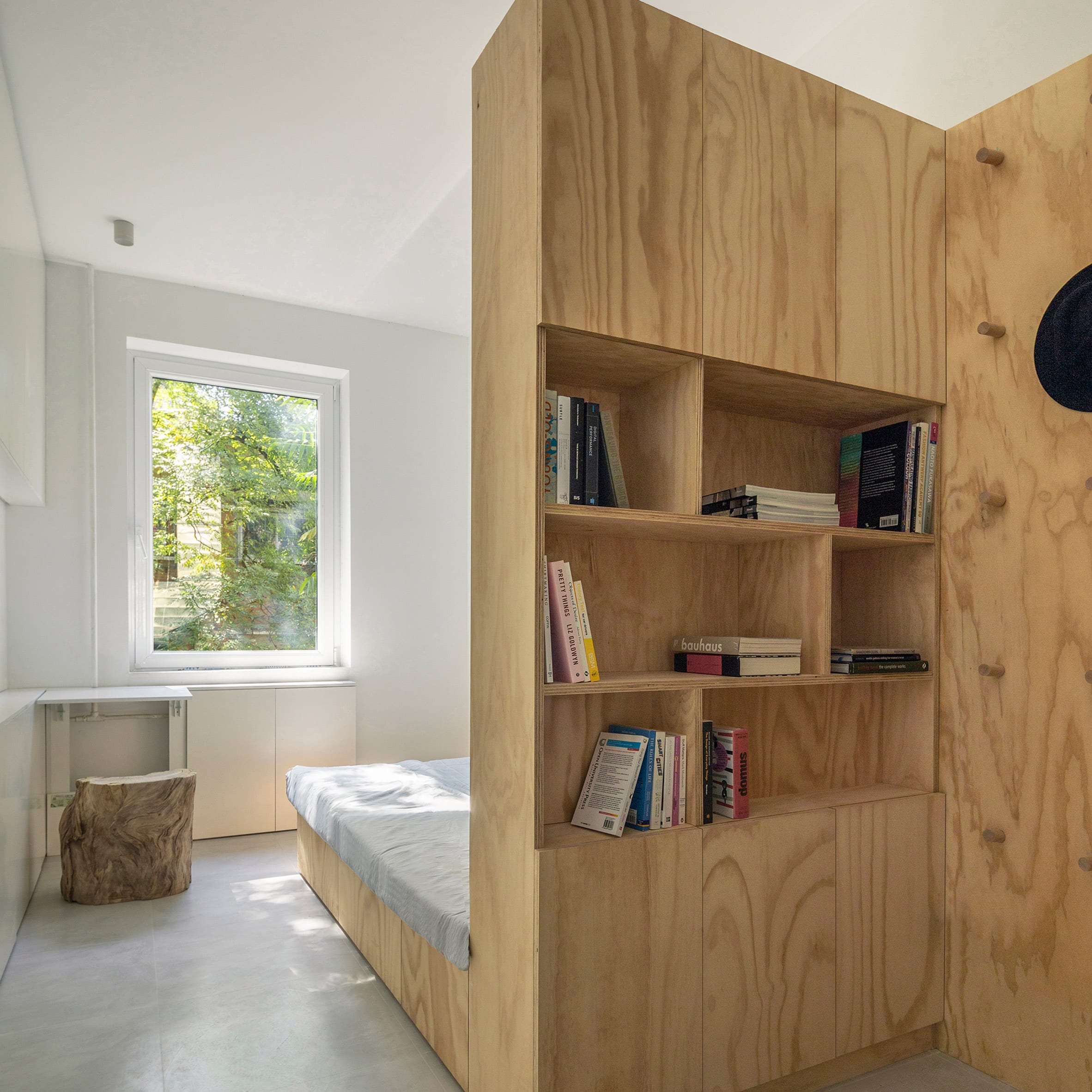 Multifunctional plywood structures that create spaces for sleeping, storage and drinking tea feature in this compact apartment in Beijing designed by Rooi.

Rooi aimed to create a unique apartment in the block of thirty-six identical units that was built in 1950 to provide accommodation for the families of workers employed at a nearby research institution.

At the time the apartment was built, China faced an influx of people moving to its cities, meaning that living spaces were often tight.

"There was no living room, no dining room or shower in each household," Rooi explained.

"This type of layout represents the standard post-war Chinese apartment."

As the cost of tearing down old buildings is so high in Beijing, Rooi was tasked with coming up with a modern but economical apartment concept, called T101, that could be replicated in each of the 36 units to make them more private, functional and livable.

"The project's core was to find a way to adjust the old collective residence into modern city life and retain its previous structure, recovering the degraded green areas," said ROOI.

Rooi came up with a floor plan that incorporates a bedroom, living room, kitchen, dining room and bathroom all within the unit's tight 50-square-metre footprint.

Designed to appeal to the city's college students and white-collar workers, the layout features an open-plan area for cooking and dining with a work table at its centre.

This area provides enough space for residents to receive guests, work from home, relax in an armchair or exercise.

An original column is positioned in the centre of the space and has been clad in stone to protect it and turn it into a design feature.

Running along one side of this flexible space, an enclosed north-facing structure made from birch plywood serves as a reception, tea room or temporary guest room.

Above the wooden enclosure, a large storage area can hold suitcases, outdoor sports equipment and other bulky items. A small toilet and a shower room are located on the opposite side of the space next to the apartment's entrance.

The bedroom is separated from the rest of the apartment and features a custom plywood bed with shelving built into its tall headboard, while a compact desk is located next to the window. The walls are lined with slim cabinets for additional storage.

Neutral colours and materials were chosen throughout so that the owners can put their own stamp on the interior.

"The apartment was designed as open as possible and functionally very compacted," the architecture studio told Dezeen.

"Natural materials and colour have been used throughout the design to create a comfortable and peaceful feel in contrast with contemporary city life."

Elsewhere, design studio I IN has created concept apartment in Tokyo to reframe the way that Japanese homeowners perceive renovated apartments.

Photography is by Weiqi Jin.