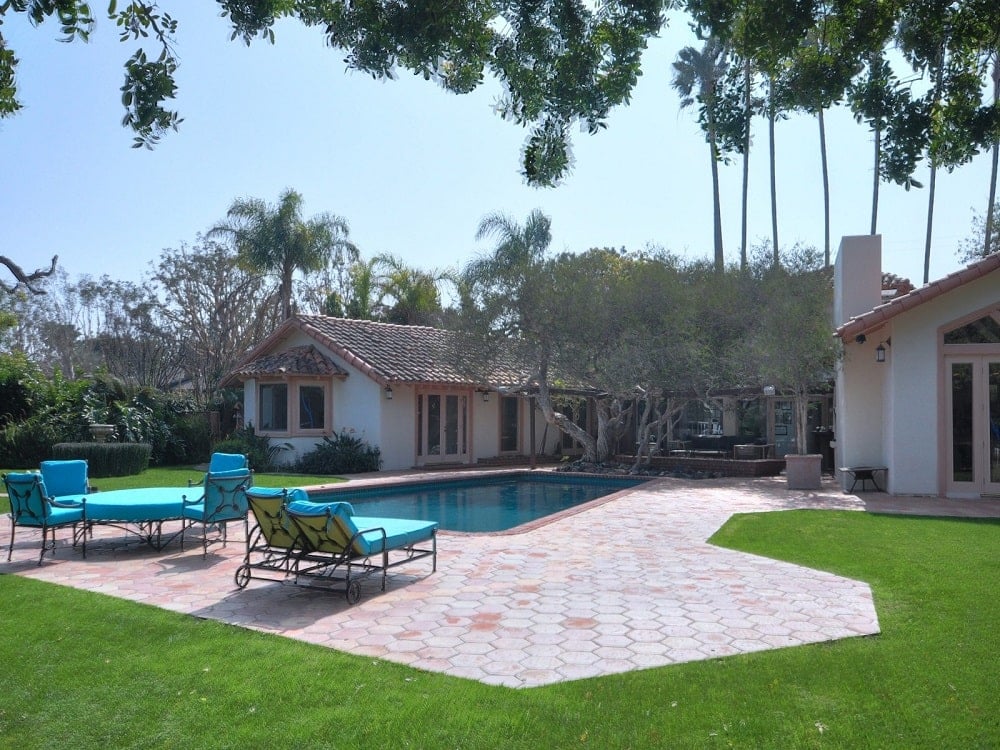 Sean Penn is a successful actor. Director, screenwriter, and producer who was born in California in 1960. He began his career on television in 1974, and he made his film debut in the 1981 movie ‘Taps.’ Throughout the 1980s and 1990s, Sean Penn was at the height of his career/ Some of his best-known films include ‘Dead Man Walking’, ‘Sweet and Lowdown’, ‘I Am Sam’, ‘She’s So Lovely’, and ‘Hurlyburly’. Due to his success in various aspects of the film industry, Wealthy Gorilla says that Sean Penn now has an estimated net worth of $150 million. His wealth means that he can take his pick of luxurious properties. In 2009, he bought a spectacular Malibu beach house in the enclave of Point Dume for $3.8 million. The actor has now put this stunning property on the market for $6.55 million.

This property is located in one of the most coveted spots along Malibu Beach is a gated retreat on a cul-de-sac. Built in 1960, the beach house comes with keyed and deeded access to Riviera Beach. It is a single-story hacienda-style property in a classic U-shape that boasts vaulted ceilings. Both the interior and the grounds have features that will appeal to many people and that will offer an excellent lifestyle. 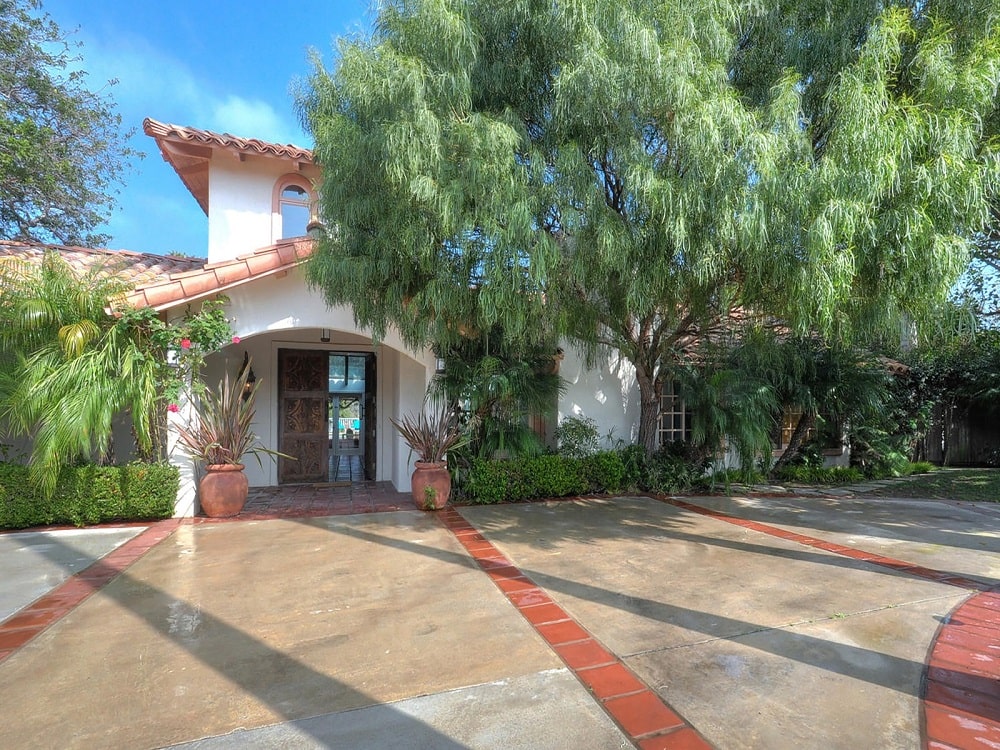 Throughout the property, there is a light and airy feel thanks to the large windows and white walls. A contemporary style is incorporated in every room. Although white is the predominant feature on the walls, splashes of color have been added to the walls with colorful, modern pieces of art. As with most of the rooms in this beach house, the walls of the main living area are painted a bright white. However, the ceiling is a light grey with spotlights, so this adds some warmth. At the far end of the room, there is a fireplace with a large window to one side and double doors leading to the garden on the other. 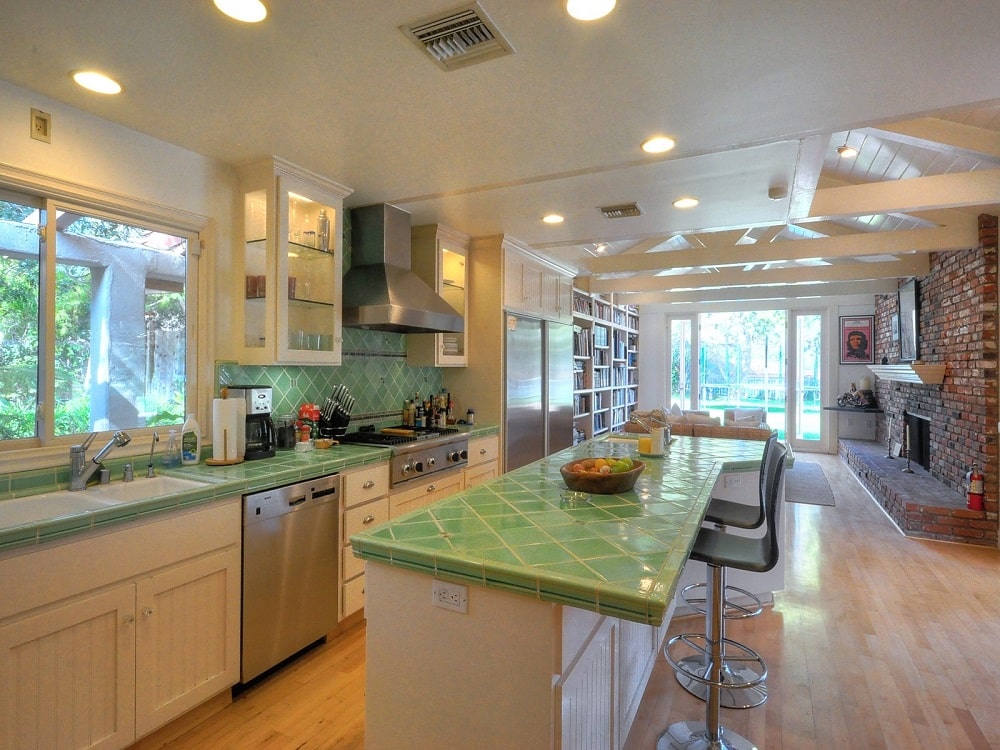 One wall of the room features a fitted and painted wooden wall unit that houses the television and boasts both shelving for display purposes and cupboards for storage. The opposite wall features a large piece of art that is illuminated by spotlights. To the other end of the living room, some skylights add even more light to the room. The kitchen and connected second sitting room also feature skylights. The wooden cabinetry has a hint of beige in the kitchen, says Home Stratosphere . An island offers additional storage and also acts as a breakfast bar with seating. The countertops and the units feature green tiles. 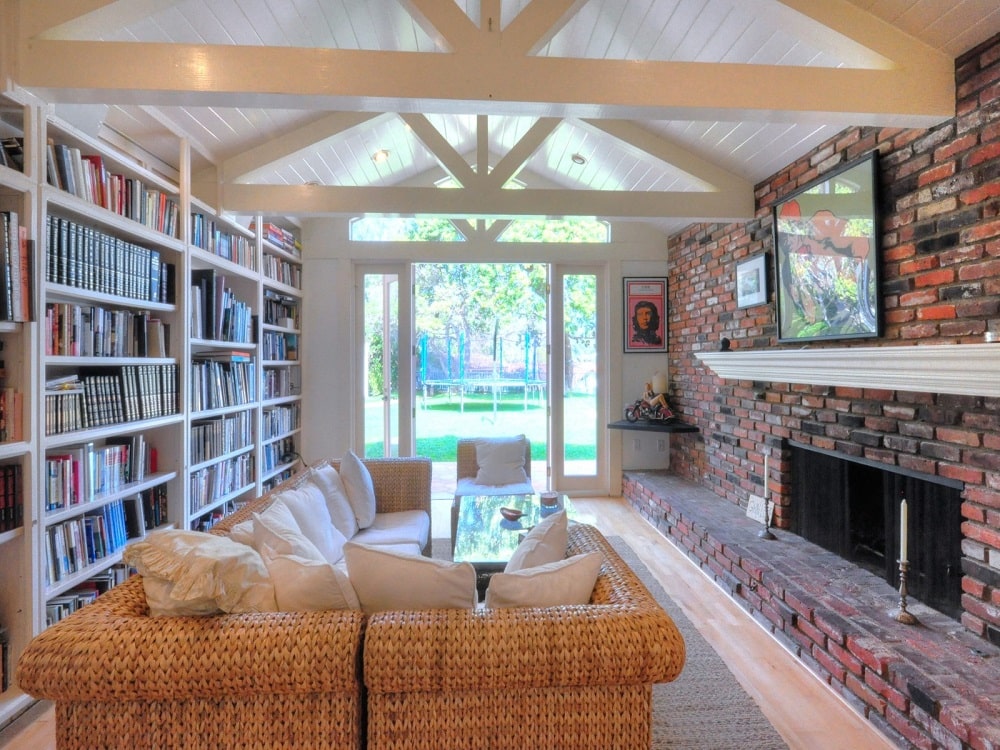 There are modern elements in the kitchen, including a double countertop gas hob with a stainless steel cooker hood and a large stainless steel refrigerator and freezer. Other stainless steel appliances include an oven, dishwasher, and microwave, all of which are in-built. Ceiling spotlights and light wooden flooring give the kitchen a contemporary and airy feel. An open-plan design means that the kitchen leads straight through to the second sitting area. At the far end of the room, floor-to-ceiling windows add light and a bi-fold door leads to the garden from this comfortable and cozy room. An interesting feature of the second sitting room is the vaulted and beamed ceilings, which are painted white.

One wall boasts floor-to-ceiling shelving, is which is currently used as a bookcase. Opposite, there is an exposed brick feature wall. This wall has a fireplace with a hearth that runs the length of the room. This house has three spacious bedrooms, says Top Ten Real Estate Deals, so there is room for a family to live in the property or single person or couple who need spare rooms for guests. There are also three bathrooms, all of which have modern fixtures and fittings. 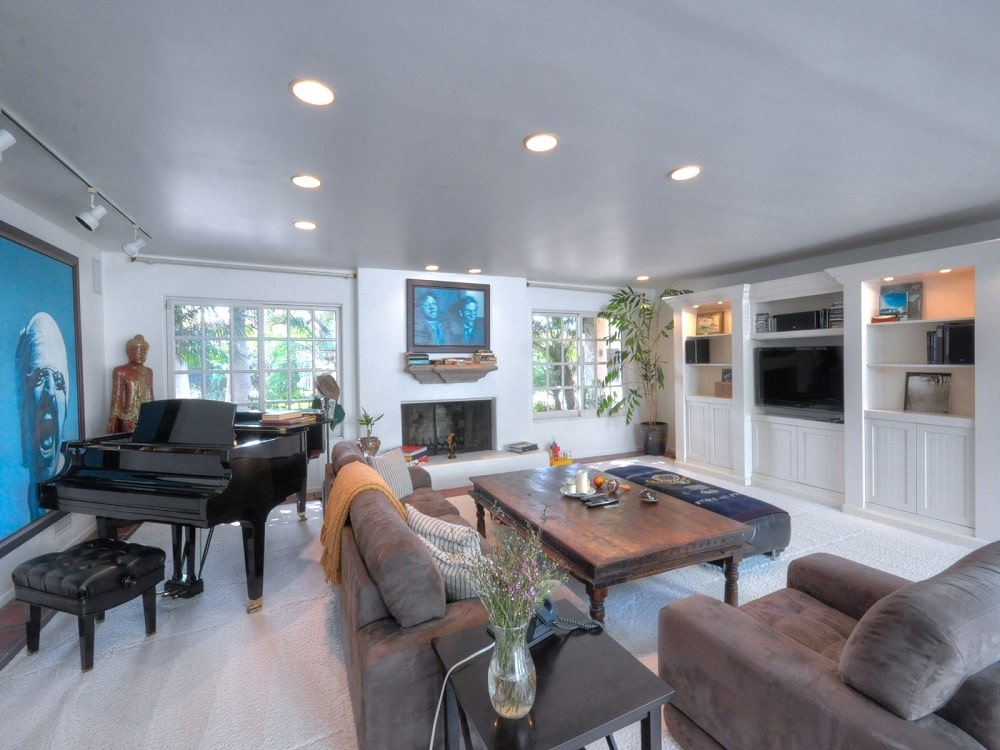 The Exterior of the Malibu Beach House

Although the interior of the property is stunning, it is the beach house’s exterior that will appeal the most to those who want to enjoy the beach lifestyle. Of course, this property’s key feature is the keyed and deeded access to Riviera Beach, which is accessed from the end of the cul-de-sac. Easy access to the beach means that the homeowners can reach the sandy beach within minutes, where they can relax or enjoy the water. Within the 1.4-acre grounds of the property, there are open grassed areas and a rose garden. There is also a large outdoor pool, which is perfect for exercising or cooling off from the heat of the California climate. A paved area with seating surrounds the pool, and this is ideal for relaxing by the pool. It is also a great space for outdoor entertaining. 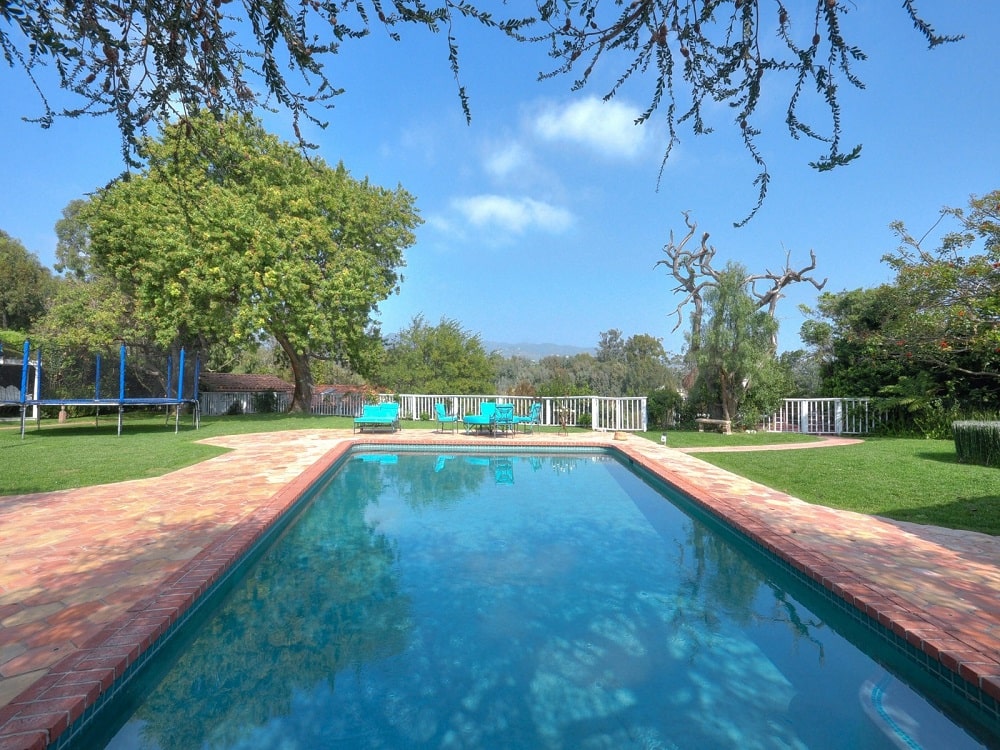 The U-shaped property is also built around a pretty courtyard that is sheltered from the sun by a large tree that has its branches growing around the beams that run from one side of the property to the other. There is a sense of privacy within the grounds as they are surrounded by mature trees. To the front of the property, there is a large driveway that is tiled in large gray and beige tiles, interspersed with smaller terracotta tiles. The latter coordinates well with the terracotta tiles of the house. There is enough space on the driveway to park several vehicles. The front of the property also features greenery, such as shrubs, potted plants, and a large tree. 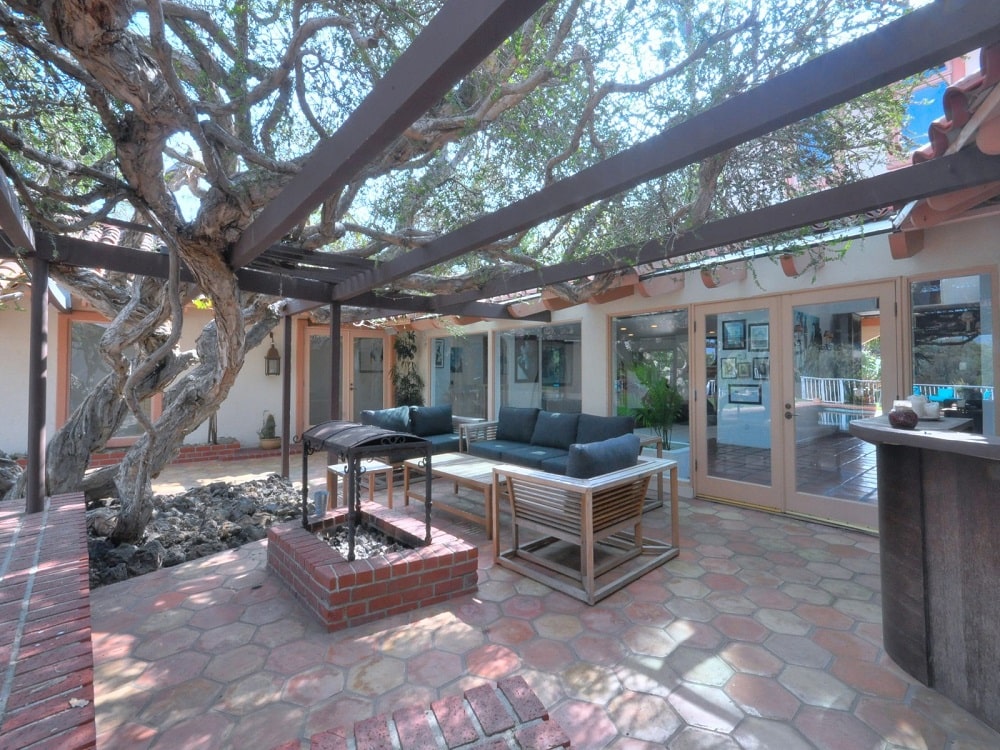 Tips on Transforming an Unimaginative Rental, Courtesy of a Design Editor
Aug 03, 2022