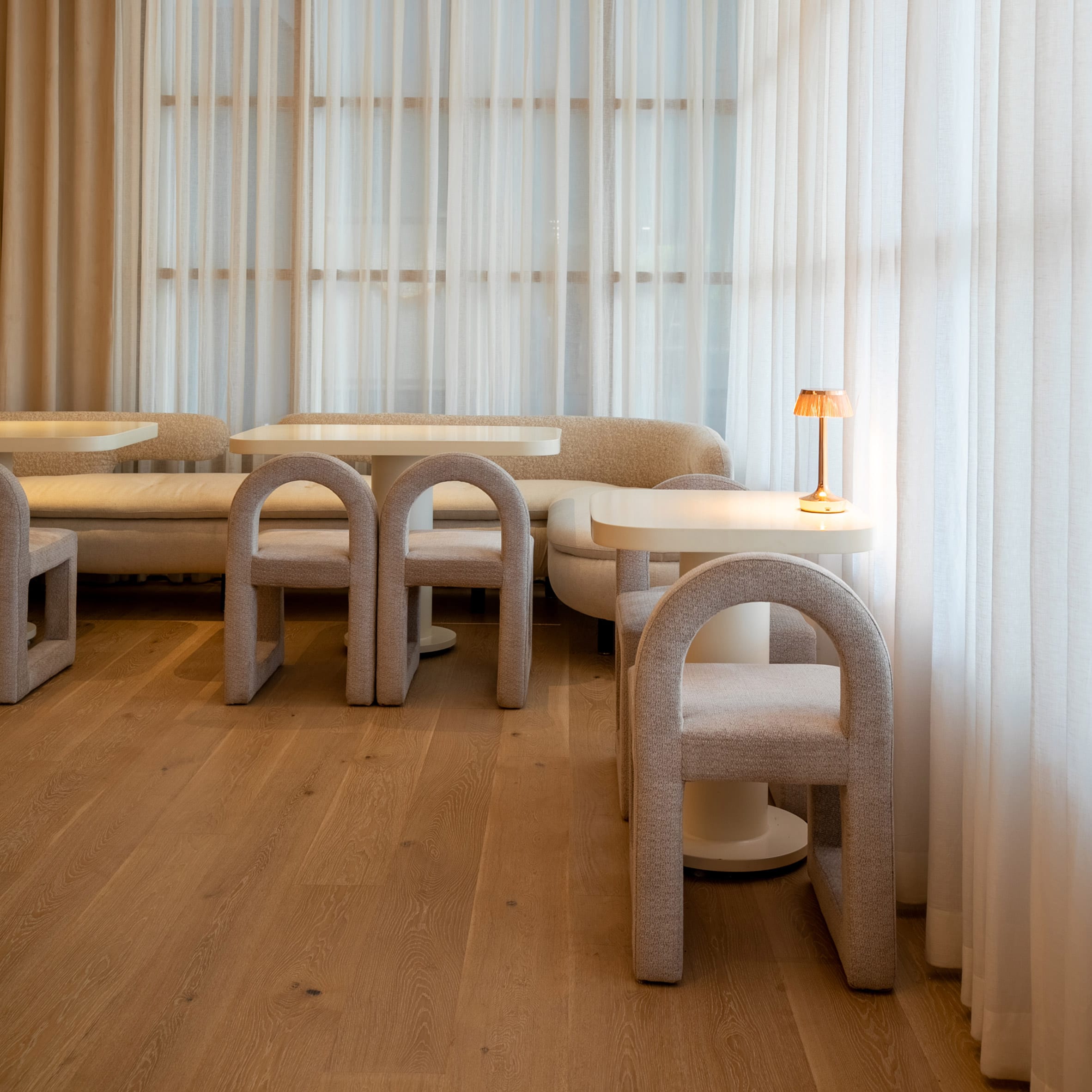 Textured surfaces and sinuous forms populate this outpost of vegan restaurant chain Sequel in Mumbai, which was designed by local architect Ashiesh Shah.

Located in an office development in the city's Bandra Kurla Complex, the interior was conceived as a calming antidote to the busy business district beyond.

"The restaurant alludes to a timeless charm, celebrating the ethos of subtle luxury, slow living and refined lifestyles," Shah explained.

Divided into two zones, Sequel features a grab-and-go counter on one side and a cafe on the other, which serves as a formal dining area for customers looking for a break from work.

The two areas are divided by a central partition with a doorway on either side for easy circulation.

Shah designed the restaurant as a reflection of Sequel's philosophy, which it described as "futuristic in form and earthy at its core".

Textured materials are paired with neutral colours and soft edges to create a "visually soft interior".

"The material choices for the space pay homage to Indian craftsmanship and handmade processes," Shah explained.

A sculptural lighting fixture, handmade using lacquered channapatna beads from the Indian state of Karnataka, hangs in the centre of the seating area.

Here, walls are lined with oak wood veneer that runs from the ground onto the walls and along the gridded facade, while a sheer curtain covers the wrap-around window. A matching console unit is finished in the same oak wood veneer.

The grab-and-go section of the restaurant is enveloped by curved walls clad in louvred wooden panelling that was handmade on site, before being finished in an open-grained veneer with grey lacquer.

A monolithic serving counter enveloped in moulded off-white Corian resin emerges from the wall and snakes out into the dining area.

Its curved lines are echoed in the false ceiling overhead, where globe-shaped lights are positioned like pearls within oyster-shaped reliefs made from textured lime plaster.

The same bumpy plaster was applied to parts of the walls and a series of oyster-shaped shelves that appear to grow out of the wall, while patterned terracotta bricks line the floor.

Many of the furniture pieces, including the rounded chairs and sofas in the formal dining area as well as the consoles, bar units, coffee counters, communal tables, shelving and storage cabinets, were custom-made for the project.

"The lighting, materiality and form together celebrate a narrative of perfect imperfection," Shah explained.

In his work, the architect says he practices the Japanese aesthetic philosophy of wabi-sabi,  which finds beauty in imperfections.

Other restaurants with textured surfaces include a Kyiv eatery by Yakusha Design  with rough concrete walls and this fine-dining restaurant where Valencia studio Masquespacio employed uneven surface finishes such as rough stucco, ceramic and terracotta tiles.

Photography is by Atelier Ashiesh Shah.