Hi, Friends,
How are you? I hope you are staying well and encouraged.
"This is a small backyard but you have a lot going on."
This is a quote from the tree trimmer. 😁
The neighbors replaced the 30 year old retaining wall between our houses.
I had to remove the pool and greenhouse before they would begin work because they didn't want to damage anything. 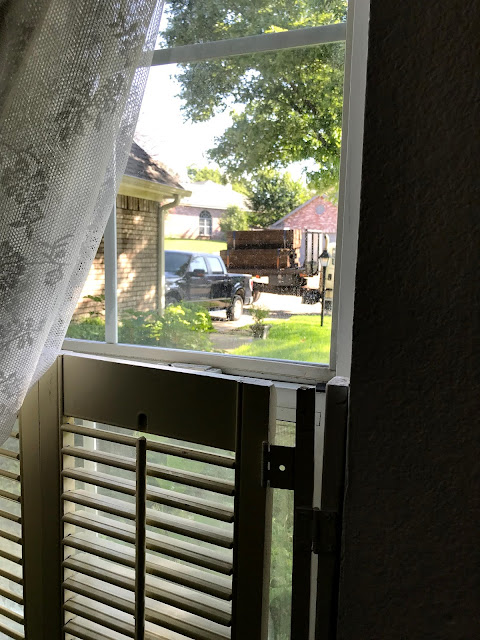 The noise as they dropped the railroad ties off of the truck was unbelievable. 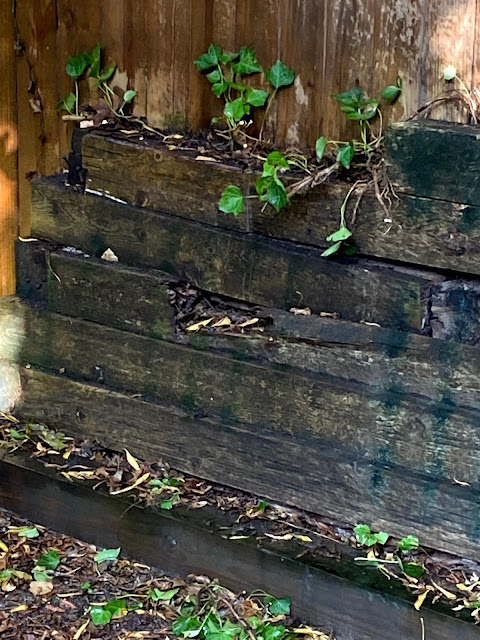 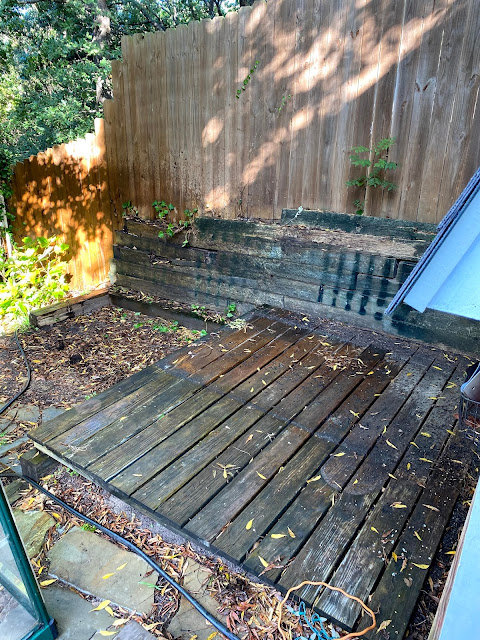 According to everyone we talked to about it, this is their wall because it holds up their house. Bill kindly explained that he's already replaced the wall that holds up our house. It's counter-intuitive because we see it but we had no control over it's replacement. Bill was very diplomatic and said it in a very kind manner. 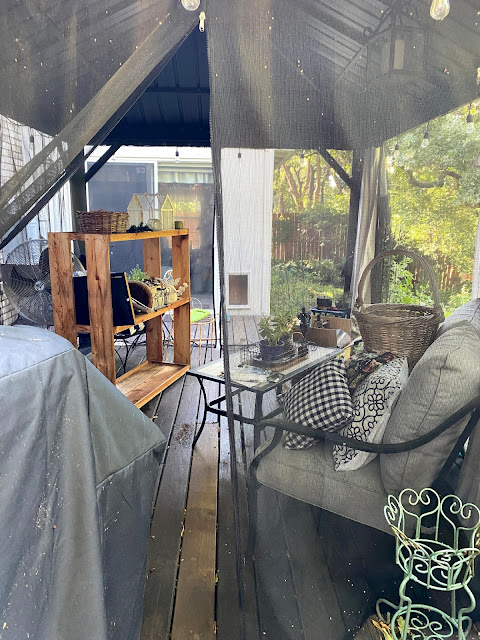 It was a good opportunity to give my greenhouse a good cleaning. All wasps were eradicated.
I'd just gotten stung in East Texas so I was not thrilled to have to deal with wasps. 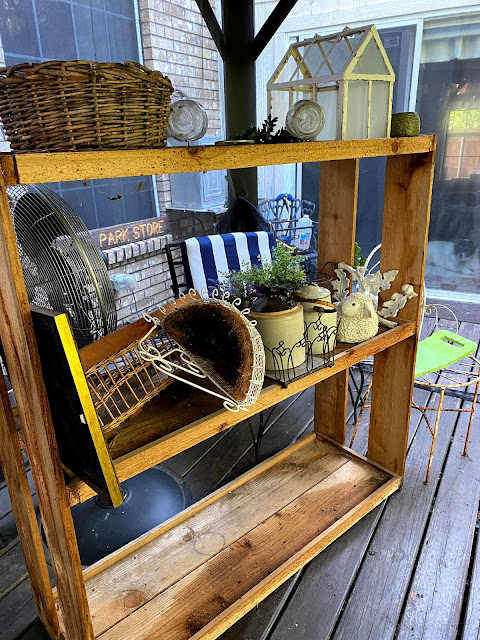 The greenhouse and the stuff inside of it was everywhere. I created a big box of stuff to donate. 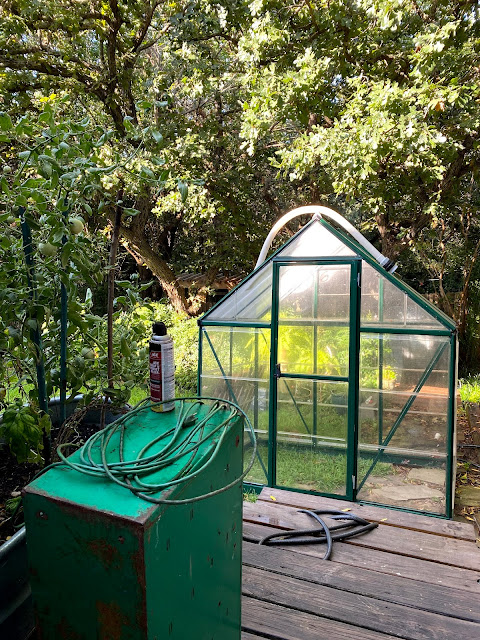 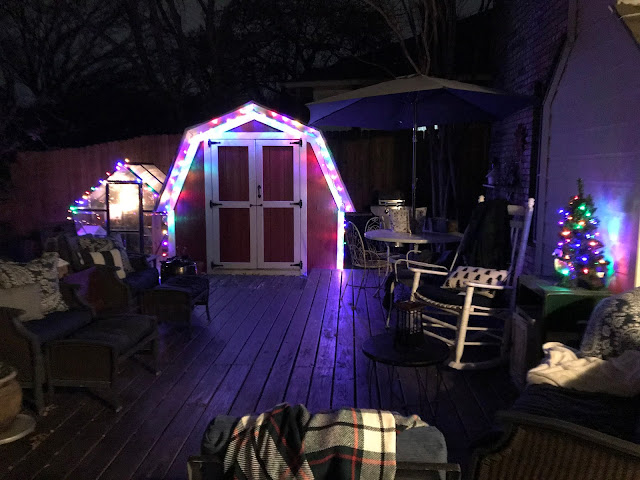 My greenhouse needed to be moved anyway and this was a good opportunity to try it in a different spot.
Uri showed how ineffectual it was and that it is was more of a garden ornament rather than a place for over-wintering plants. Spring starts got too hot. Cold air coming up through the deck didn't help my tropicals. My plants survived Uri because I brought them all inside. We didn't lose our electricity so my stuff didn't die from the frigid weather.
I'd like to take my Palram Greenhouse out to East Texas but I don't think it would survive the trip unless we rented a U-Haul. It would look very out of proportion anyway. We have almost nine acres so we can have a bigger greenhouse.  I've started shopping for one. If Bill is on board, that will be on the list for next year. 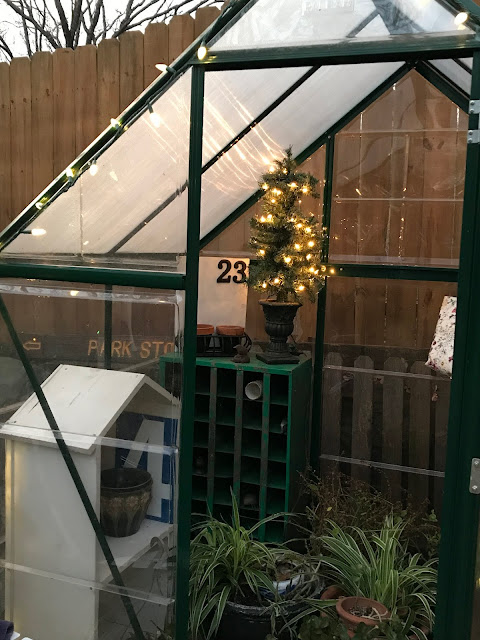 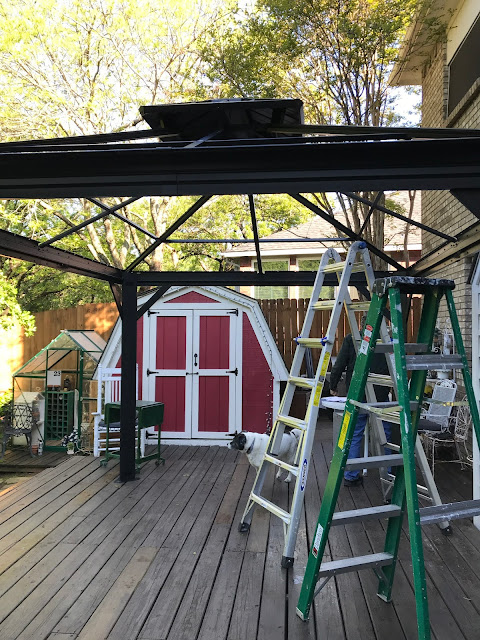 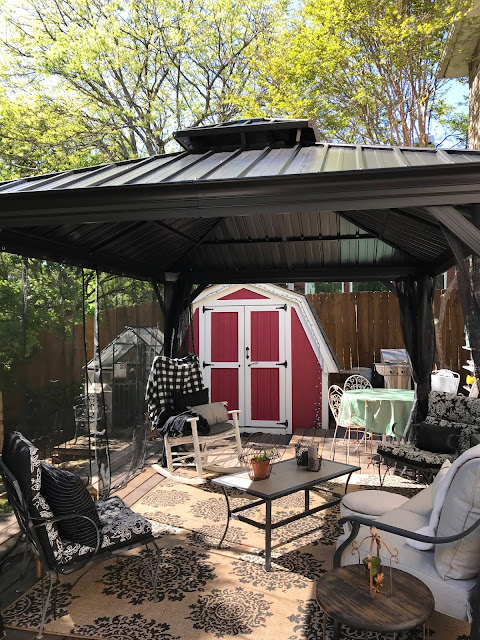 The greenhouse next to the shed looked okay. When the pool was set up during the summer and once we put a cover on the deck, it looked a little like Ma and Pa Kettle lived here. No offense to anyone named Kettle. Have you ever met someone named Kettle? I have not so hopefully there will be no offense taken. I adore Kettle chips, just FYI.
Several of my garden things got moved to East Texas but there was still a lot going on in our smallish back yard. What if the greenhouse was on the other side of the yard?  It would get it out of Kettleville. The empty deck gets some sun so plants in pots could be moved over there. All this was skittering around my brain while the wall was being built.
There is nothing level in our yard. we had to level an area for my birdbath. It's so sloped that Bill had to level an area for the swing.
This week while trying to carve out and level an area for the greenhouse, I hit my wall. Square pavers seemed like a perfect idea for the floor. Thinking about getting in the car and loading up 20 stepping stones was overwhelming to me. Twenty years ago nothing would have stopped me from loading them up in the truck and hauling them to the back yard to begin flooring the little house. Waving the white flag, a called was placed to my favorite landscaper and garden friend. He will come by on our regular mowing day for a design consultation. 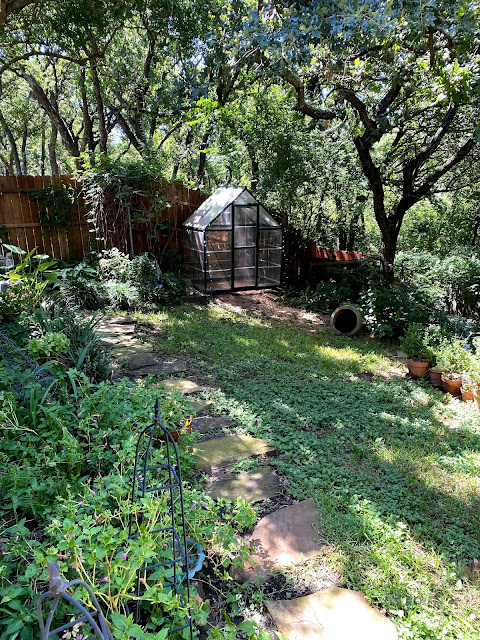 In the meantime, the greenhouse is across the yard and I love it there.
Stepping stones will lead to the door. Lights are already in place to see how cozy it will look at Christmas.

Does this make it more functional? I hope so. Uri was so uncharacteristic of Texas weather. All my plants were doing fine last winter until it looked like we would hit 2 degrees. If I decide to try tomatoes again they can get an early start . My plumbago survived being overwintered but it bloomed so late. It might do better staying in the greenhouse to get some heat during the spring and early summer. 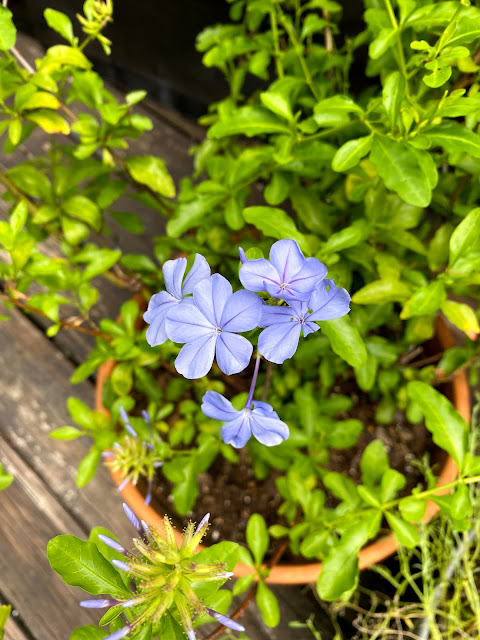 New shelving would help make the greenhouse more functional.  Bill made a shelf unit for me a few years ago. It is wonderful but it's a tad too deep. Hornets love building nests underneath each shelf.
It's now on the deck holding flower pots and such. 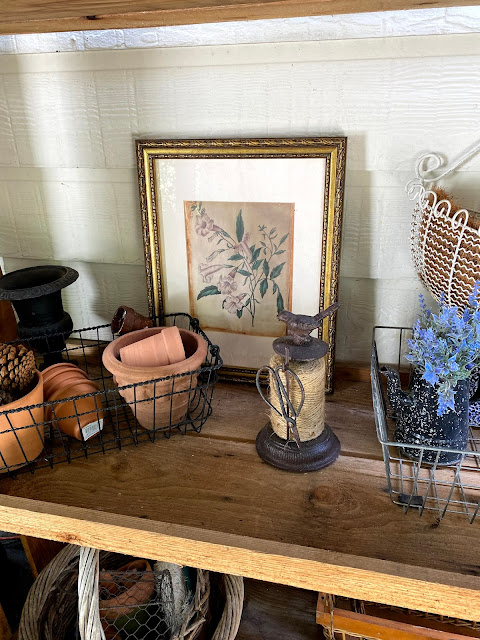 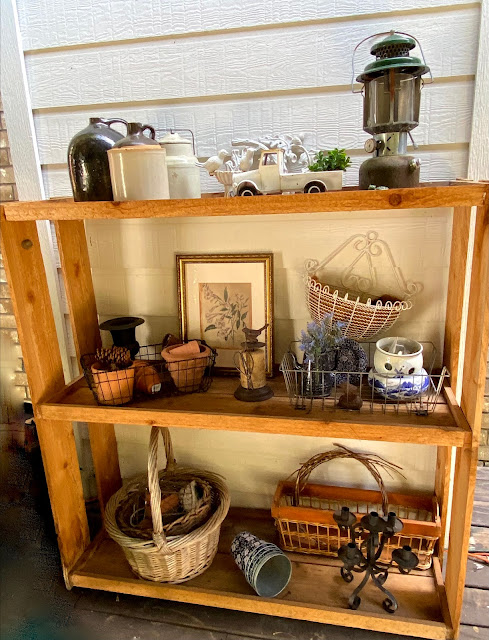 The baker's rack is back in our garden room. 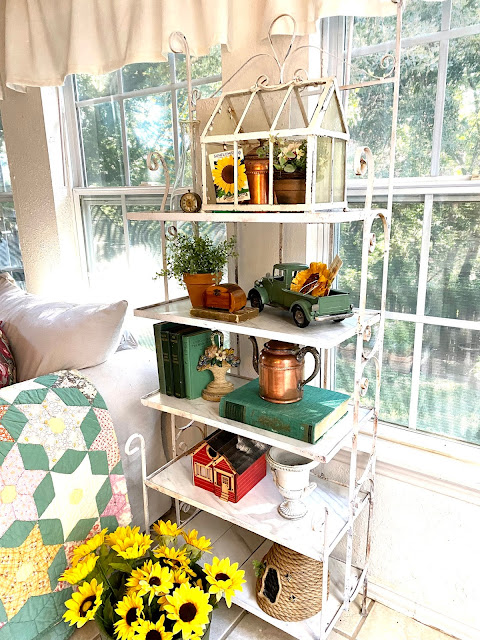 It's been styled with some late summer pieces.
Styling the baker's rack for the fall and Christmas has always been so much fun so having back in the house is going good.
To see some fun late summer baker's rack inspiration, go visit Debra at Common Ground.
She has an amazing collection of vintage seasonal decorations.
I'll be back with some styling soon.
Stay well. I hope you are experiencing more patience than I did last week.
Thanks for all your sweet comments in the last couple of weeks. I appreciate them so much.
You'll see the greenhouse when it's resting and level.
Katie